How Are Plastics Produced? 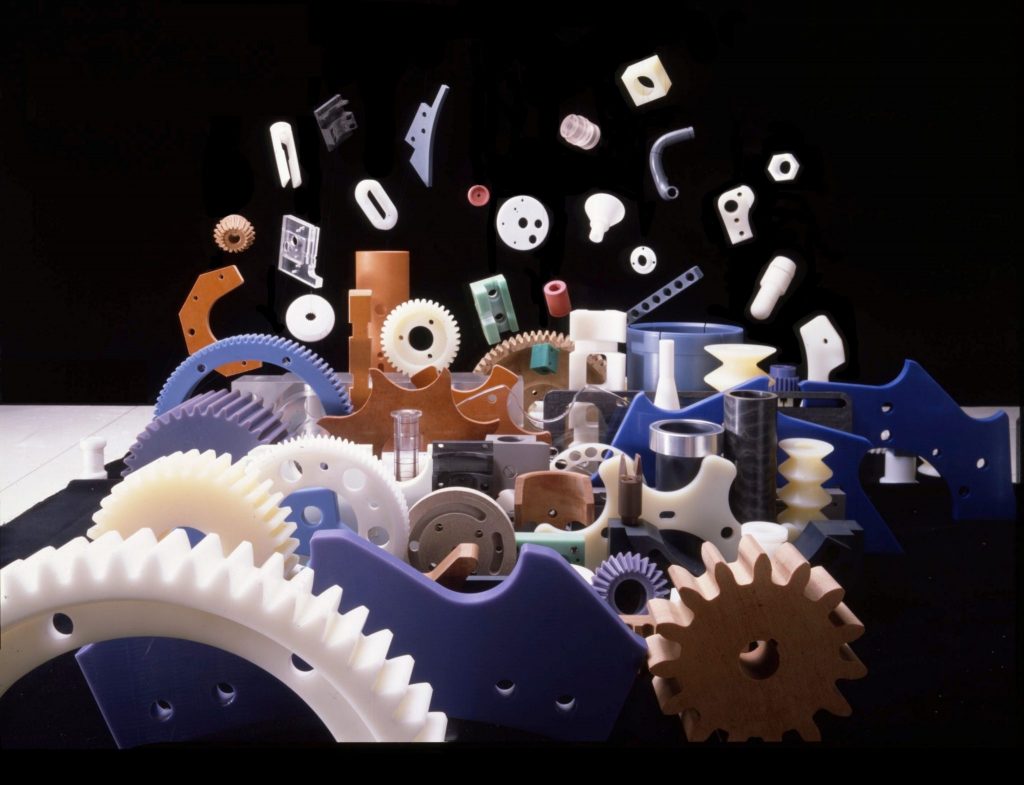 The chemical structure and the nature of plastic materials have a significant relationship not only to the properties of the plastic but to the ways in which it can be processed, designed, or otherwise translated into an end-product.

Basically, all polymers are formed by the creation of chemical linkages between relatively small molecules or monomers to form very large molecules or polymers; the same idea as connecting boxcars on a railroad to form a train, the boxcars being monomers and the train a polymer. Like boxcars, the molecules must have the ability to be coupled at either end.

Actually, in polymer formation, the process is more like forming many, many trains in a railroad yard simultaneously from the boxcars available in the yard in a competitive fashion. The train-forming process of polymerization comes to a stop when factors prevent any additional boxcars from being added. Thus, we ultimately end up with trains having a variety of lengths, yet all composed of the same kind of boxcars.

The above process is characterized by the simple combination of molecules without the generation of any byproducts formed as a result of combination. In reality, the addition-type process can occur in several ways. One way simply involves the external chemical activation of molecules that causes them to start combining with each other in a chain-reaction-type fashion (by the bonding of atoms directly within the reacting molecule). Another way for an additional polymerization to occur is through a rearrangement of atoms within both reacting molecules, but still without the net loss of any atoms from the polymer molecule. A third way for additional polymerization to occur is for a molecule composed of a ring of atoms to open up and connect with other ring-type molecules being opened up under the influence of the proper catalytic activators, once again with no net loss of any atoms from the polymer structure.

Because there is such diversity among polymer molecules, a number of techniques for defining and quantifying these characteristics are in use by the industry and are also of value to processors and end-users as a determinant of polymer properties.

It is also important to know something about the molecular weight distribution within the polymer, that is, the relative proportions of molecules of different weight. If the resin is made up of chains close to the average length, it is called narrow; if it is made up of chains of a wider variety of lengths, it is called broad. In general, narrow-range resins have better mechanical properties than broad-range resins, although, as with the case of the higher molecular weight materials, they are somewhat more difficult to process!

In addition to the size of molecules and the distribution of sizes in a polymer, the shapes or structures of individual polymer molecules also play a major role in determining the properties of a plastic. Polymers may align themselves into long chains of molecules without any side branches, or lateral connections between molecules. However, it is possible for polymers to form more complex structures. Thus, polymer molecules may form in the shape of branched molecules, in the form of giant three-dimensional networks, in the form of linear molecules with regular lateral connections, and in the form of two-dimensional platelets. Because of the geometry of such molecules, some can come closer together than others in which the structure prevents more intimate contact. Thus, polymers that can be packed closely or exhibit little hindrance ordinarily can more easily form crystalline structures in which the molecules are aligned in some regular pattern.

Amorphous polymers do not have melting points, but rather softening ranges; are normally transparent; and undergo only small volume changes when solidifying from the melt. Crystalline polymers, on the other hand, have considerable order to the molecules in the solid state, indicating that many of the other atoms are regularly spaced; have a true melting point, and have a relatively large volume change during the transition from melt to solid.

Thus, many different structures are possible with plastics – and each will affect the basic properties of the polymer. For example, linear polymers, such as high-density polyethylene, are made of molecules that resemble spaghetti in a bowl and are relatively free to slide over one another or to pack more closely together (in the absence of steric hindrances due to large pendant side groups). Branched polymers, such as low-density polyethylene, on the other hand, have side appendages and interconnections that cause the molecules to resemble clumps of tree branches that cannot be easily compressed or compacted. Thus, branched polymers (with more voids) are more permeable to gases and solvents than linear polymers, lower in density (since the molecules are not compacted together), and more flexible. Linear polymers, on the other hand, are higher in tensile, stiffness, and softening temperatures.

Cross-linked structures, in which the individual chain segments are strongly bound together by chemical unions, also have special characteristics (as in the family of thermosetting plastics). They do not exhibit creep or relaxation unless such primary bonds actually are broken by continually applied stress or by elevated temperatures high enough to cause chemical decomposition of the polymer. Cross-linked polymers also are fairly resistant to solvent attack; solvents may swell such polymers, but seldom cause complete rupture or dissolution.

It should also be noted that whereas the effect of molecular weight and molecular weight distribution on properties is relatively fixed and stable with temperature (barring decomposition of the polymer), the arrangement of the molecules within the structure of a polymer mass is in most cases relatively sensitive to temperature. Thus, the structure of any given polymer can be significantly changed by exposing it to different temperatures and thermal treatments.

For example, heating a crystalline-type polymer above its melting point and then quenching it can produce a polymer that is far more amorphous or noncrystalline in structure than the original polymeric sample. Such a quenched material can have properties that are significantly different from the properties of a sample that is cooled slowly and allowed to recrystallize.

The effects of time on a polymer structure are similar to those of temperature in the sense that any given polymer has a “most preferred” or equilibrium structure in which it would prefer to arrange itself, but it is prevented from doing so instantaneously on short notice by steric hindrances. However, given enough time, the molecules in a polymer ultimately migrate to arrange themselves in this form. Elevating the temperature and making the molecules more mobile or spreading them apart allows them to accomplish this in a shorter time and vice versa.

Thus over an extended period of time, the properties of a polymer can become significantly different from those measured earlier if the structure of the polymer was in an unstable form when the properties were initially evaluated.

What are Engineering Plastics?

Engineered plastics commonly refers to polymers used or tailored to end-product needs. Acetal, ABS (acrylonitrile­butadiene-styrene), polyamide, polyamide-imide, polycarbonate, polysulfone, polyethersulfone, and polyarylsulfone are familiar examples. The term is also used for any polymer with physical properties good enough for use as structural materials. Advanced composites or engineered composites refer to the group of materials usually associated with aerospace structures. The word advanced infers that new, engineered reinforcements or matrices are being used rather than traditional reinforcements of glass with a matrix of polyester. Kevlar, carbon, and boron fibers in an epoxy matrix are used to produce aircraft structures, athletic equipment, and automobile components. All these terms denote an improvement in materials for producing high-performance products.

There are a number of ingredients of plastics, but resins are the basic organic materials from which plastics are formed. Fillers, solvents, plasticizers, stabilizers, and colorants influence many of the characteristics of plastics. A resin is the polymeric material that helps impart many of the physical characteristics of the solid plastics. It is the molecular arrangement of the resin that determines whether a plastic is thermosetting or thermoplastic.
Thermoplastic materials increase in plasticity with temperature. They become soft when heated and solid when cooled to room temperature. One analogy is a dish of butter. When heated, the butter becomes soft; when cooled to room temperature, it solidifies. Thermoplastics are easily formed into useful products because weak forces allow slippage between the molecules. The molecules themselves are held by the stronger covalent bonds.
There is a practical limit to the number of times a thermoplastic material may be formed because repeated processing may cause some of the additives to be lost.

Thermosetting plastics are polymeric materials with structural frameworks that do not allow deformation or slip to occur between molecular chains. They are composed of strong, primary covalent bonds and may be thought of as one large molecule. In thermoplastics, only secondary van der Waals forces, dipoles, and hydrogen bonds exist between chains. In thermosetting materials, heat is commonly used to cause a chemical reaction (polymerization) resulting in crosslinks between chains. While in a low molecular mass state, heat and pressure are commonly used to cause the thermosetting material to flow into a mold cavity.

Once solidified, these materials may not be reshaped or formed by applying heat. These plastics have a permanent set once they have been polymerized. Thermosetting plastics are stronger than thermoplastics and have a higher product-service temperature. Thermoplastics may hold many process advantages over thermosets, however. A major advantage is that thermoplastics may be ground and recycled into other useful products. 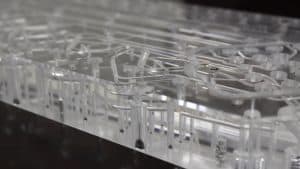 What Exactly Is Diffusion Bonding? 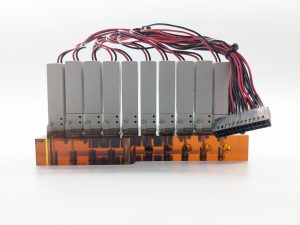